What is a Blue Chip NFT? 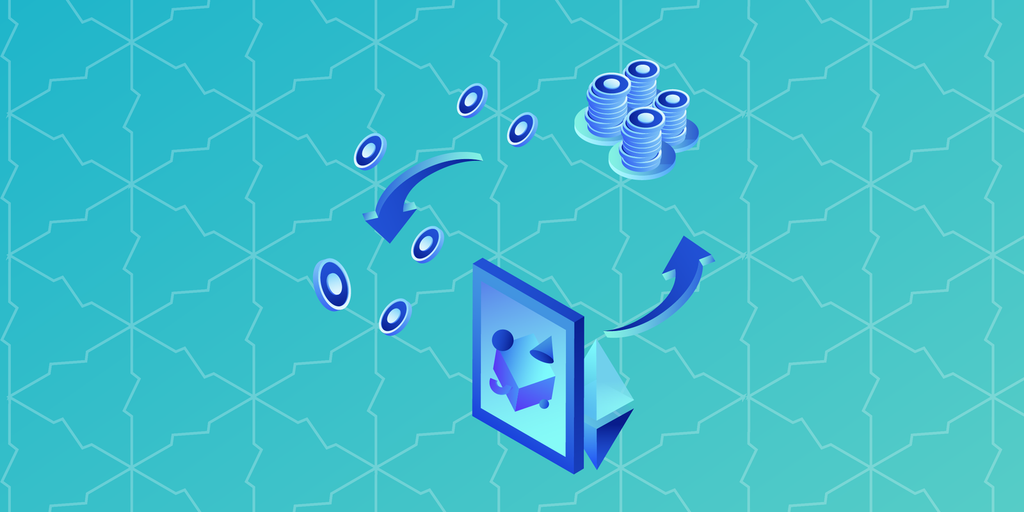 Non-fungible tokens, NFTs, are cryptographically unique tokens linked to digital and physical content, which provide proof of ownership, authenticity or membership in a group. In games, NFTs allow players to truly own the unique digital assets they purchase, such as pet monsters or starships, and they are free to trade or sell these NFTs as they wish.

In October 2022, the global NFT market saw over $333 million in sales, according to data from the NFT tracking site, CryptoSlam. Another popular site for tracking data on NFTs, DappRadar tracks Blue Chip NFTs and the broader NFT and decentralized application economy.

What is a blue chip NFT?

In traditional finance, a blue chip is a nationally recognised, well-established and financially sound company. According to Investopedia, blue-chip companies are known for weathering downturns and operating profitably in the face of adverse economic conditions.

Blue-chip shares are considered relatively safe investments with proven success and stable growth. Although blue chips are reliably stable, they are unlikely to generate the same high returns as potentially riskier investments. This also applies to blue chip NFTs, common to average NFTs.

CryptoPunks, considered one of the earliest NFT collections, was created by development studio Larva Labs. CryptoPunks are 10,000 images tokenized as NFTs on the Ethereum blockchain. Having a CryptoPunks NFT means that you are the sole owner of a one-of-a-kind pixel avatar. CryptoPunks are the OG Ethereum NFTs, created in 2017 – long before anyone outside of crypto die-hards knew or cared about scarce digital collectibles. Believe it or not, CryptoPunks were released for free back in 2017. Ethereum’s ERC-721 non-fungible token standard wasn’t even a thing then, and the two-man team at Larva Labs released them as an experiment. Ethereum wallet owners snapped up the 9,000 CryptoPunks that were released to the public, while Larva Labs held onto the rest.

NFT volume gradually rose over the next three years, but in late 2020 and especially early 2021, demand for these provably scarce digital collectibles skyrocketed. The secondary market value of CryptoPunks shot through the roof, leading to multi-million dollar NFT sales, auctions at Christie’s and Sotheby’s, and a wealth of CryptoPunks used as Twitter profile pictures.

But while CryptoPunks was one of the first NFT gatherings, there is none bigger than the Bored Ape Yacht Club

The most expensive CryptoPunk sold to date went for $11.8 million in ETH in June 2021 at a Sotheby’s auction to Shalom Meckenzie, the largest shareholder of DraftKings.

Developed by Yuga Labs Bored Ape Yacht Club is a collection of 10,000 profile pictures minted as NFTs on the Ethereum blockchain. Bored Monkey collectors own an illustration of a disinterested looking monkey with randomly generated traits and accessories. No two images are exactly the same.

Purchasing a Bored Ape Yacht Club NFT grants access to the titular “club” and membership has benefits. In January 2022, Bored Ape generated more than $750 million worth of NFTs in trading volume, including subsequent variant sets, per data from CryptoSlam. Bored Apes became the Twitter NFT avatar for athletes, musicians and more.

As of publication, the record sale for a single Bored Ape NFT is 740 ETH, or just over $2.9 million, in September 2021. It was purchased by the developer of the upcoming Ethereum game, The Sandbox.

Launched in October 2021, Doodles is a series of NFTs with art by Burnt Toast. Doodles come in a delightful variety of colors, characteristics and sizes, with a collection size of 10,000. Each Doodle allows its owner to vote for experiences and activations paid for by the Doodles Community Treasury.

In September, Doodles revealed that musician and producer Pharrell Williams had joined Doodles as Chief Brand Officer, with plans to serve as executive producer for an album of music inspired by the project. In the same month, Doodles NFT sales increased by 1,200% and were valued at $704 million at the time.

Launched in January, Azuki became one of the hottest NFT projects released in 2022 in terms of total trading volume, and has just reached a new milestone. The Ethereum-based profile picture project debuted in January and saw its first secondary sale cross $1 million by March 2022.

The anime-inspired Ethereum collection became one of the best NFT projects of 2022.

Twin Flames was launched in February 2021 and was conceived as a tribute to artist Justin Aversano’s twin brother, who died in the womb. Twin Flames is a collection spanning over 100 images, each of a different set of twins. The photos, taken around the world between 2017 and 2018, show a wide range of motifs in the location and the clothes of their respective choice, all united by the common trait of being twins.

Minted as Ethereum-based NFTs in February, Twin Flames are coveted by collectors. Snoop Dogg and Gary Vaynerchuk own Twin Flames NFTs, and the portrait collection has generated nearly $13 million in trading volume by October 2021, per OpenSea. That year, one NFT in the collection sold for 506 ETH or nearly $1.9 million.

Created by Dapper Labs, CryptoKitties are non-fungible tokens, originally built on the Ethereum blockchain using the ERC721 token standard. Before the existence of ERC721, tokens on blockchains were fungible or exchangeable; any Bitcoin or Ethereum token is identical to any other. ERC721 made it possible to create unique, non-fungible tokens.

Each CryptoKitty is unique and has its digital genome stored in a smart contract. The immutable genotype stored in the smart contract determines its visual appearance or phenotype. Any two CryptoKitties can be bred using a genetic algorithm, and an offspring is produced with its unique characteristics (or “attributes”).

CryptoKitties’ popularity quickly became a problem for the Ethereum network, which could only process so many transactions at once, causing a queue to build up. Breeding CryptoKitties became so popular that it prevented other businesses working on the platform from being able to confirm their transactions quickly.

In May 2020, CryptoKitties announced that they were moving to a dedicated blockchain, Flow.

Like stocks, NFTs come and go with Blue Chip status. The once unstoppable Bored Ape Yacht Club saw its value plummet when the crypto bear market started earlier this year. In January, popular singer Justin Bieber bought a monkey for $1.3 million; as of November 2022, that JPEG is worth $69,000.