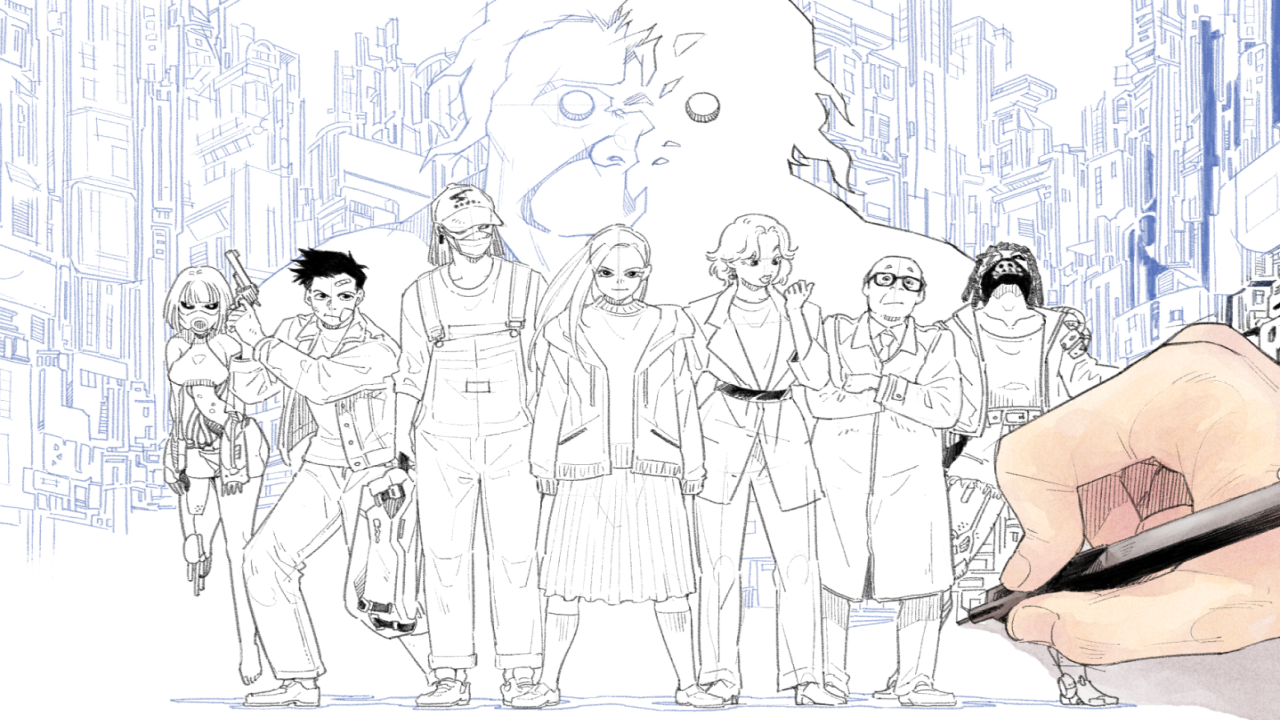 “SUPER SAPIENSS” is an unprecedented entertainment project that brings together three directors (Yukihiko Tsutsumi, Katsuyuki Motohiro and Yuichi Sato) who have led the Japanese entertainment and film industry, and producer Takeshi Moriya as board members to create the original story and visualize it.

The project takes on the challenge of an entertainment DAO using FiNANCiE’s “token issuance” and token-based “co-creation community” to usher in a new era of entertainment in Japan.

The company has completed two rounds of token-issuing funding, raising a total of over ¥50 million in support and approximately 3,000 community members.

The supporters who have the pieces not only observe the production process of the content, but are closely involved in the project through various processes carried out by the community, and we develop our activities with the important element of “sharing the same excitement and joy” ” with the three initiators.

The creative for SUPER SAPIENSS NFT, which started on September 26, 2022, is based on director Tsutsumi’s original character proposal, with original art developed by manga artist Chobi, who also works on the SUPER SAPIENSS web movie. The creative is filled with Japanese culture that attracts worldwide attention.

SUPER SAPIENSS NFT is a so-called generative NFT format. Generative NFT is a form of NFT that uses a program to randomly combine image data divided into parts to create a variety of different types of art.

For more information on SUPER SAPIENSS NFT, see the white paper below.

The sale of SUPER SAPIENSS NFT will take place in order of pre-sale and public sale. The date and number of sales depends on the sales format.
When it comes to pre-sales (website for example), only holders of the Allow List (AL: right to join pre-sales) can join.

Regardless of the sales format, please prepare for a crypto wallet and GAS fee in advance.

The second sale in pre-sale (website to estuary)
Overview: How to buy NFTs on a first-come, first-served basis, limited to holders of the Allow list on the minting website
Period: December 18 (Sun) 00:00 ~ December 19 (Mon) 00:00 EST
Quantity: The NFTs, which were not minted on the first pre-sale (maximum 5 units per person to mint)

Payment method: ETH payment
The team will select and announce the winners, who will be given the permission list for the secondary sale, from applicants on the dedicated website.

The following benefits are also available to NFT holders;

Finance Inc. offers a crowdfunding 2.0 service, FiNANCIE, which takes advantage of blockchain technology and delivers a new token economy through the issuance, planning and management of tokens (both FT and NFT). In addition, there are more than 170 token issuers (individuals, sports clubs and projects).

This is a press release. Readers should do their own due diligence before taking any action related to the Promoted Company or any of its affiliates or services. Bitcoin.com is not responsible, directly or indirectly, for any damage or loss caused or alleged to be caused by or in connection with the use of or reliance on any content, goods or services mentioned in the press release.

Bitcoin.com is the premier source for all things crypto. Contact the media team at [email protected] to discuss press releases, sponsored posts, podcasts and other options.