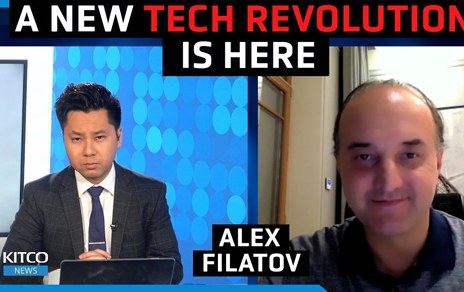 (Kitco News) – As the crypto winter continues, there are still areas of the blockchain ecosystem that are flourishing under the radar. Alexander Filatov, co-founder and CEO of EverX, spoke with Kitco News anchor David Lin about how investors can navigate the crypto hype cycle, how DAOs can help prevent the next FTX-type event, and where NFTs can create real value.

One area where Filatov sees progress is in the public sector. He said governments around the world are discovering interesting applications for blockchain technology, including central bank digital currencies (CBDCs), identity management and voting. “I think governments are discovering that there is something about the technology that can provide more functionality,” he said. “If we’re talking about CBDCs, you can program the money and you can enable more traceability.”

Filatov sees two trends driving government blockchain adoption. “One is the desire to control decentralized space,” he said. “And then the desire to embrace the technology, to bring more programmability-slash functionality, and also more transparency and control into the financial system.”

Filatov also sees a different future for NFTs, one more rooted in real-world applications than their speculation-driven heyday, especially with the rise of AI-driven creative processes.

“When NFTs really explode in the spring of 2021, you’ll remember that you could generate collections of rocks, monkeys, frogs, you name it, and everyone could see that this was just a short-term hype,” he said. “Now that you have technology like Midjourney or some of the other things, where you can generate amazing collections in minutes, it just doesn’t make sense. The future of NFTs is utility, it has to bring the real utility component to make sense.”

Filatov sees several areas where the programmability and robust ownership components of NFTs can solve real problems. “FIFA has been struggling for years with people not reselling their tickets. I was just in Qatar for the FIFA World Cup event and it’s still not resolved,” he said. “With blockchain you can program resellability, you can program certain rules, if you want you can build in royalties, etcetera.”

For artists, he said NFTs offer a new way to cut out middlemen. “For example, a famous artist can just, using the modern marketplace, issue his own tickets and do the concert in the metaverse, sell the tickets as NFTs, and there are no producers, there are no middlemen, there are no ticketing companies, nobody. It’s just an artist and the users.”

Big brands come on board

Filatov noted that companies and big brands are starting to discover how NFTs enable them to directly address their customers and fans, and he believes use cases will become more sophisticated as the industry evolves.

“Football clubs for example, and Starbucks and Playboy, have all tried with NFTs in the last year, with varying degrees of success,” he said. “A lot of them failed because they rushed, I think, and didn’t think enough about the utility, but that’s just the start.”

DAOs can prevent mismanagement and fraud

When asked what he believes is holding back the growth of the crypto ecosystem, Filatov said that while the broader market plays an important role, developers can go a long way toward helping adopt new tools and technologies.

“The biggest factor, of course, is the global financial system,” he said. “When interest rates in the US rise, it’s only natural that people move their money away from more speculative sectors.” Filatov acknowledged that the blockchain and crypto space, like high technology, is still very risky. “I think the moment funds start to come back from more defensive investment segments to riskier, higher yielding segments, I think we’re going to see the opposite of that.”

The other big factor is adoption, which he believes will improve as applications become more intuitive and user-friendly. “We’re still talking about 100 million users using blockchain-slash-crypto more or less regularly,” he said. “And that [adoption] is taken care of by constantly improving the user interface and user interface. I remember when I first tried some of the wallets and exchanges in 2016, it was horrible. From the user interface, UX standpoint, it was like the internet from 1993 or something. Now we’re on the internet of maybe 2000, with a much friendlier user interface and better user experience.”

To find out which crypto market segments Filatov believes are poised for growth in 2023, watch the video above.