Will Blockchain power the city of the future? – ARABIC TIMES 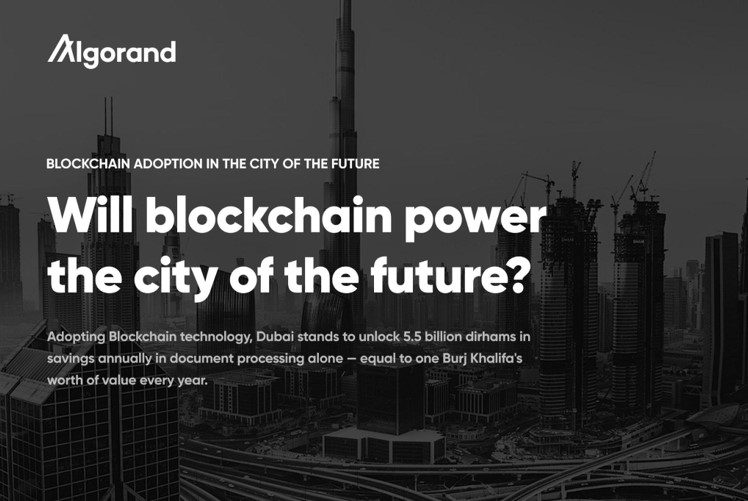 The United Arab Emirates, and Dubai in particular, is increasingly attracting international interest. Tech investments, start-ups and talented entrepreneurs from all corners of the world are flocking to Dubai for its forward-looking policies and lofty ambitions, aiming to be the world’s first city powered by blockchain technology. Let’s take a look at the progress so far and some of the key players involved in building the city of the future.

Dubai: City of the Future

Thanks to low taxes, ease of doing business and world-class handling of the pandemic, both investment and immigration in Dubai are breaking new records. Visitor numbers to our emirate almost tripled in the first half of 2022, and around half of all investment in start-ups in the Middle East and North Africa (MENA) region is flowing into the UAE.

With a need to diversify our economy away from oil exports, Dubai, once a fishing village, has quickly become a leading center for trade and transport, operating one of the world’s largest ports and busiest international air transport hub. Today, Dubai is a global leader in luxury travel, real estate and finance, and is on the way to becoming a global technology hub – and the world’s first city fully powered by blockchain technology.

By adopting blockchain technology, Dubai will achieve efficiency, digitize 100% of all public transactions and become a completely paperless city. Smart Dubai estimates that Dubai will realize as much as 5.5 billion dirhams in savings annually in document processing alone! It is equivalent to the value generated by the Burj Khalifa every year. As well as improving efficiency and unlocking new revenue streams, blockchain will allow Dubai to reduce its carbon footprint, saving around 1 million trees each year.

Smart Dubai’s goal is to make Dubai the “happiest city on earth” by creating and enabling a blockchain ecosystem for start-ups and established businesses and leading the global stage by piloting cross-border blockchain use cases.

With the ongoing threat of climate change facing the MENA region, along with conflict, food insecurity and water scarcity, economies must grow in a way that is environmentally sustainable. Thanks to blockchain, Dubai is creating a playbook to solve this problem, converting it into the true city of the future.

Blockchain allows businesses to be greener

Cryptocurrency has received negative press recently for its high energy consumption. Bitcoin, for example, uses around 150 terawatt hours of electricity annually, more than the entire annual use of Argentina, leading to many questions about its environmental impact. However, this consumption only applies to blockchains that run on the so-called Proof-of-Work (PoW) consensus mechanism that relies on the energy-intensive practice of mining to verify transactions.

As the blockchain industry has evolved, another type of consensus model, called Proof of Stake (PoS), has emerged that relies on validators to verify transactions and completely bypasses the need for mining. PoS blockchains are estimated to be around 2000 times more energy efficient than PoW blockchains, making this technology infinitely greener and more scalable at the same time.

One such PoS blockchain that enables businesses to build sustainably across different verticals (from cross-border payments to healthcare) is Algorand. Not only does Algorand run on a variant of PoS, but it also offsets all of its carbon emissions and has partnered with ClimateTrade, a CO2 carbon offset blockchain marketplace, to become the world’s first carbon negative blockchain.

How Algorand Blockchain could help Dubai achieve its goal and vision

As the greenest and most efficient blockchain, Algorand is fully aligned with Dubai’s goals and vision. Its advanced technology provides institutional infrastructure that is highly scalable, secure and energy efficient, allowing Dubai to move forward as the first city powered by blockchain – without harming the environment.

Algorand blockchain is a fully managed, scalable and secure platform. Unlike some of the larger blockchains with slow translation times and high fees, transactions on Algorand take just four seconds and cost fractions of a penny. Algorand is designed to be as accessible to businesses as possible, and decentralized applications (dApps) can be built in various programming languages ​​depending on the developer’s preferences, from Go and Java to Python and Rust.

Thanks to its speed, availability and scalability, Algorand’s enterprise-grade infrastructure is ideal for supporting public entities’ blockchain prototyping activities. In fact, several businesses are already building prototypes on Algorand, and even FIFA has chosen Algorand as its official blockchain platform.

Algorand will be a FIFA World Cup Qatar 2022™ Regional Supporter in North America and Europe, and a FIFA Women’s World Cup Australia and New Zealand 2023™ Official Sponsor, making it the first blockchain project to sponsor the FIFA World Cup 2022 in the MENA region. With environmentally sustainable technology and some of the world’s biggest names building on its blockchain platform, Algorand is the perfect solution to help Dubai achieve its goals and become the first city powered by blockchain – the city of the future.