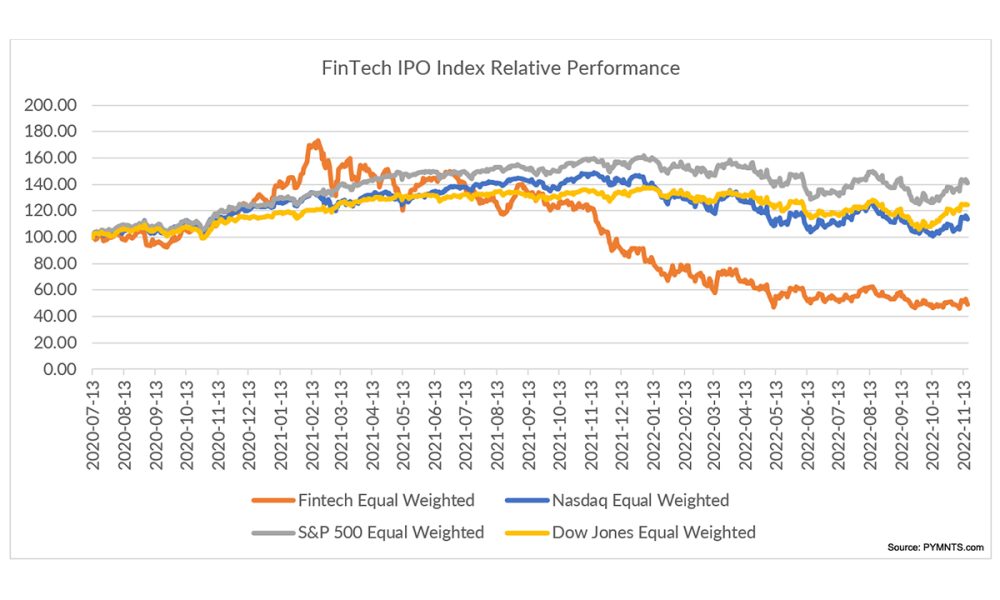 Not everything was about crypto-land in the last few days in the tech space.

Of course, you’d be hard-pressed to believe anything other than FTX’s meltdown, bankruptcy filing, and seismic shocks to issuers and users of bitcoin and stablecoins happened.

But again, the earnings season continued to roll on, reaching (almost) the end of the run for the September quarter. For the past five sessions and heading into Friday’s action and next week’s short plan, the FinTech IPO Index was up 7.1%. Year to date, the group is still down 46.6%, which gives you a sense of how disaffected tech investors have become with the space.

And yet, on a name-by-name basis, there were some significant gains to be seen.

Cunjun Ma, CEO, said on the conference call with analysts that “during the quarter, we continued to make progress in implementing our strategic roadmap to build an omnichannel digital insurance service ecosystem that integrates agents, businesses and customers.” Renewal premiums increased by 24.1% year-on-year.

Chinese companies in the spotlight

Volatility among several names, particularly firms operating in China, was spotlighted in Futu’s 24% rally heading into next week’s earnings report.

PaySafe rose 21.7%, following earnings late last week that showed total payment volume of $32.5 billion was up 5%. And just before earnings, the company also said last week that its prepaid eCash solution “paysafecard” is now accepted as a payment option on Microsoft.com and Xbox.com in the US and selected countries in Europe.

CEO Mike Massaro noted on the call that “while we saw strength in several aspects of our education business and delivered strong overall revenue growth, we experienced less than expected revenue growth from students coming from China. The combination of visa issuance declines and Covid-related travel disruptions, as well changes in destination may have affected growth.”

Toast lost 7.7%. As reported in this spacemanagement remained aware of the potential in the ResTech area.

“Over the past year, the percentage of total SMB restaurant locations in markets where we have over 20% penetration has increased more than fivefold,” Toast CEO Chris Comparato told analysts. “When you combine the significant untapped SMB opportunity with our nascent share in the enterprise and international segments, we still have a long runway of growth ahead of us.” The company currently has a presence in 74,000 restaurant locations, management said.

At times in the past week, earnings weren’t the only key driver. Dlocal was the most notable decliner, skidding 51%. As reported by the Financial Times, short seller Muddy Waters opened a position in the name based on what Carson Block, the Texas-based firm’s chief investment officer, said is an “unnecessarily complex” corporate structure.

“There is inconsistent disclosure around the value of payments made through dLocal’s platform,” he said, as quoted in the FT. The payments firm, for its part, has hit back in a statement, saying that “the report contains numerous inaccurate statements, baseless claims and speculation. Short-seller reports are often designed to drive the stock price down to serve the short-seller’s interests to the detriment of the company’s shareholders.” The report comes on the heels of earnings reported this month where dLocal revealed a 51% gain in payment volume to $2.7 billion, year over year.