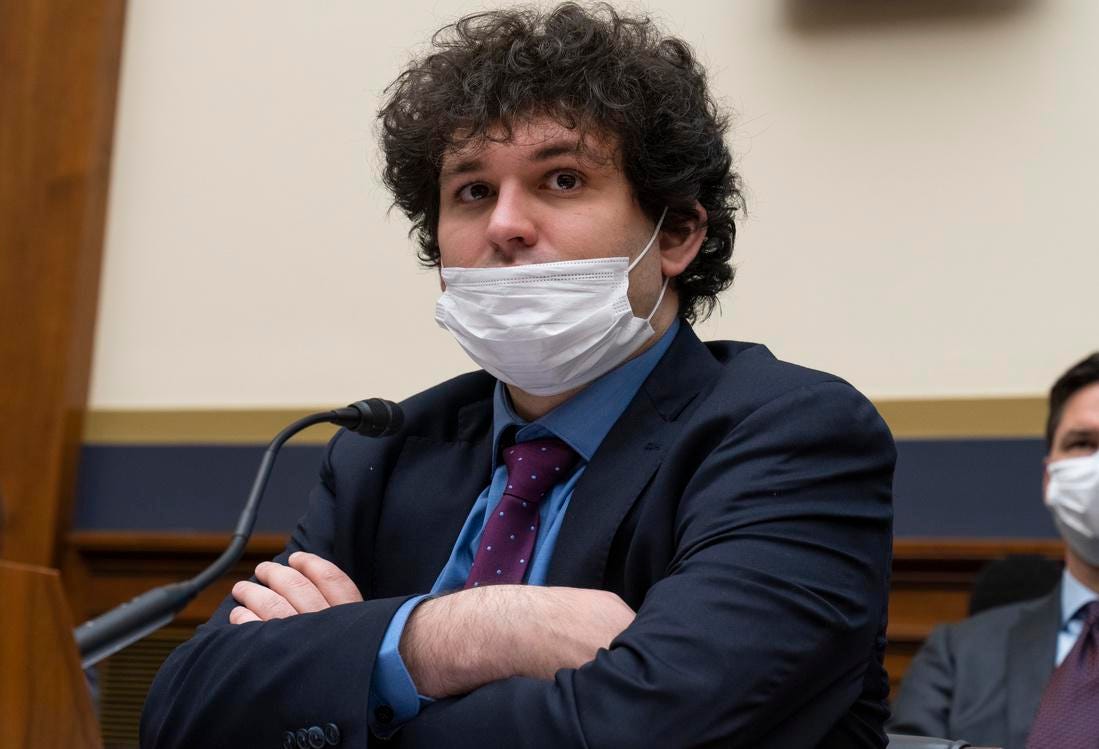 The FTX bankruptcy will send bitcoin down to around $11,000, below the current price of $16,387 as of Sunday, according to a survey of crypto fund managers conducted by BDC Consulting and published last week. Only one respondent thinks bitcoin will go above $17,000 in the short term, and three think it will crash to $0 in value. The majority of investors, about 21%, said it would fall to $12,000.

FTX was a centralized cryptocurrency exchange. It sponsored the Miami Heat arena in Florida, featured Larry David in 2021 TV commercials airing during NFL games, and was the second-largest donor to Democrats in the last midterm cycle.

The company filed for bankruptcy protection on November 11 after losing billions in crypto investors’ funds. The well-connected founder, Sam Bankman-Fried, was once heralded as the JP Morgan of his generation by CNBC star Jim Cramer. Forbes had his net worth listed at $17.2 billion as of September 27. Now he owes investors just as many billions.

Is my crypto safe?

The blowout of FTX served as a warning to retail investors to make sure they have control over bitcoin and other cryptocurrencies in “cold storage,” such as the Ledger Nano or Trezor, among others.

Many investors like to keep their cryptocurrency holdings on the exchange itself to facilitate trades without having to connect to their wallet.

But it comes with a price. To put it simply, FTX’s crash would be like the Nasdaq going bust, but investors in Applelisted on Nasdaq, and lost all its shares.

“None of the experienced crypto-investors keep cryptocurrency on the exchanges longer than the situation requires – usually trade,” says Nikita Zuborev, chief analyst at BestChange.com, a Russia-based Internet service that searches for digital currency exchange services that have the best exchange rates. “Today, savvy investors are stepping out and cold-storing their crypto in a non-custodial wallet – and preferably more than one – that guarantees protection against possible sanctions against your assets and stock market bankruptcies.”

Despite the failure, true believers are everywhere in the crypto market.

The shutdown of the FTX exchange is not the final death knell for bitcoin, based on the BDC survey respondents.

According to the survey, more than half of the crypto fund managers who responded said they still plan to increase their crypto assets in the months ahead. No one said they sell. Decentralized finance projects were their favorite sector as the FTX saga, which is still unfolding, puts the government’s spotlight on centralized exchanges.

About 66% of those surveyed by BDC said they would expand their digital securities portfolio in the next month, with about a third saying they would not take any active action because of FTX.

Other headlines this week have made it clear that investors have chosen to hold on to bitcoins, or “hodl,” as they say in the bitcoin world. No respondents said they would sell in the months ahead because of FTX.

Investors who have bought cryptocurrencies this year are throwing money away.

Bitcoin is down more than 65% year to date. Altcoins that play against other segments of the crypto market, such as themes such as new blockchain platforms and games, have lost even more.

Once a darling of the blockchain gaming investor, Axie Infinity is quickly becoming worthless. That’s down 93% so far this year.

New blockchain dear Solana is down by around 92%.

Investors have been hammered lately. FTX makes matters worse. The bear market is entrenched. There is no change in sentiment on the horizon and “everything looks bad” is the general market consensus for now.

“There has been a significant decline in the amount of capital into the altcoin markets already this year, not only because investors see no use for them, but because this crash has correlated with the general mood for bunk runs on all major exchanges,” says Alex Andryunin, CEO Gotbit, a market maker of blockchain exchange systems, built in Russia.

“In the case of Axie Infinity, or a decentralized blockchain like Algorand, I think investors no longer see the benefits of owning their tokens. It’s not enough to look cool to survive in this market. You must show investors that you have value for the users, that your project has a market fit, and that there is a clear plan for the development of the project’s ecosystem and the industry. And I think these projects lack some of these points. Investors are losing confidence quickly today, he says.

“The products in these projects have an obvious advantage for the user, and have found their feet,” he believes. “The collapse of FTX is an excellent opportunity to invest at very low prices.”

Despite the general panic, the BDC survey suggests investors are optimistic about the long term. Survey respondents also blamed the bear market for a recession in much of the West, and a slowdown in China that has turned money managers away from risky crypto investments.

For some long-term investors, the dire headlines open up buying opportunities that BDC respondents said they will take advantage of in the months ahead.

Why “Crypto” is useless as defined

Crypto is a “useless term” today, says Robert Sharratt, a former investment banker and private equity investor before he founded Swiss-based Fluid Finance, a global finance app that connects to a Web3 wallet for crypto storage.

He urges investors in crypto to never lose sight of the allure of “user-controlled finance” — the heart and soul of bitcoin and blockchain.

“It is the openness of blockchain technology that allows an entire financial system to emerge in Web3, disconnected from the banks and what they stand for,” says Sharratt.

Web3 should not be confused with Web2.0, which is often called a more corporate-controlled, closed-loop version of what we have now. Web3 is meant to be highly decentralized, a means to avoid government throttling of money.

“Users can never directly control their funds in traditional finance, nor can they ever have any insight into what happens to their funds once they are deposited. FTX was like a wolf in sheep’s clothing: they allowed crypto trading, but were just a black box database with no user control, says Sharratt.

He recently wrote about FTX and other crypto explosions on this Medium page.

“Bitcoin is user-controlled. It was designed to replace things like FTX,” Sharratt says of the late crypto giant. “If anything, big centralized failures like FTX should be positive for Bitcoin adoption.”

*The author is an investor in bitcoin, 1inch and Algorand, all mentioned in this article.

See also  Uniglo (GLO), Bitcoin (BTC) and Avalanche (AVAX) are the best tokens for beginners to start with