Coinbase is ‘a major on- and off-ramp’ for blockchain development: analyst 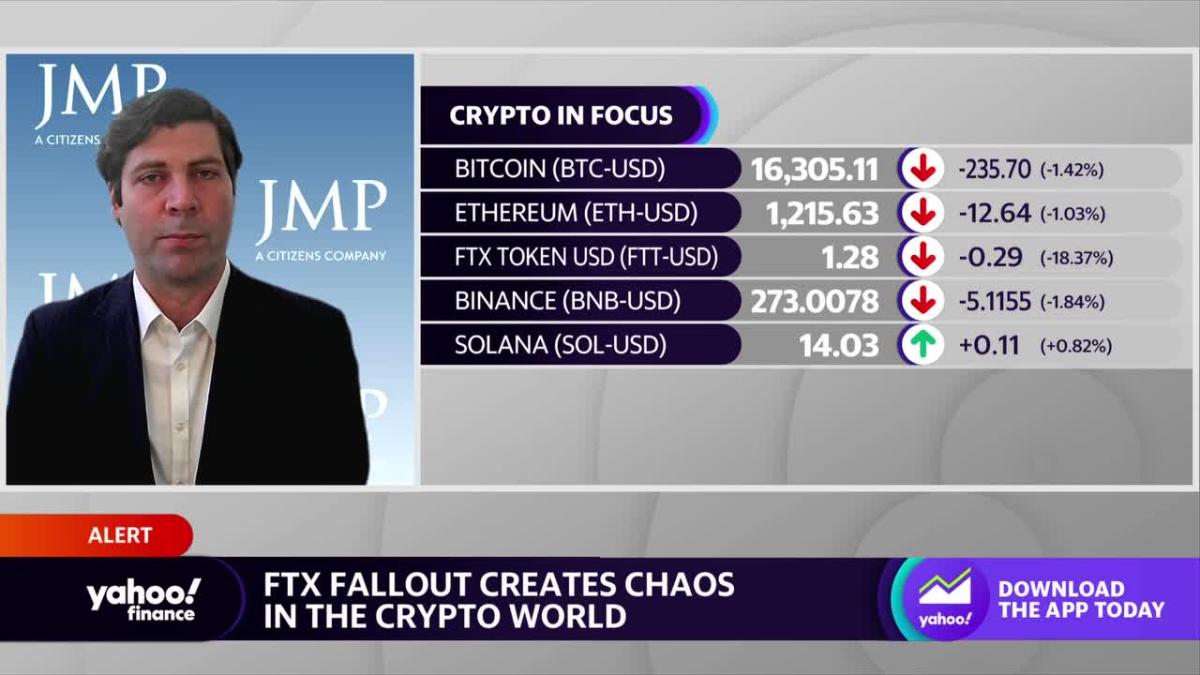 – Right. Well, that FTX collapse is also putting pressure on crypto-related stocks. Both Coinbase and Robinhood, which offer crypto on their platforms, are down over the past five days, with Robinhood shares falling, as you can see there, around 7%. Well, here to discuss the outlook for these Bitcoin-related companies is Devin Ryan, Director of Financial Technology Research at JMP Securities, a Citizens company. Welcome back to the show. So for many people who have their money tied up in some of these platforms, how much more pain is ahead?

DEVIN RYAN: I think you have to separate what’s happening in the wider industry and some of the stronger players in the space. So there is no doubt that this is a big black mark for the industry. And there is still a lot of uncertainty in relation to where we go from here, where all the money trail goes and, as it were, the tangled web. And so that creates a lot of I think distrust for the wider industry.

And that’s unfortunate because there are, in our opinion, a lot of good players, whether it’s cryptoassets and their protocols or companies that provide the infrastructure for the space. But you mentioned a couple, Coinbase and Robinhood. Coinbase is a regulated public company in the United States. They have $5.6 billion in liquid assets. They hold the customer funds one by one.

And so the bank run that happened with FTX and maybe some of the other inappropriateness, in our opinion, is not really something that applies to a company like Coinbase. They will be affected by this. So we’re not dismissive that– this hurts adoption. People are probably withdrawing money from the platform. But they have a lot of liquidity. And so we’re not, from a long-term perspective, that concerned, especially when you look at — I covered the investment banks through the financial crisis. And firms like Goldman Sachs and JPMorgan, they took market share, and they came back much stronger.

But you have to be on the other side of it first. And we’re not there yet. So there will be a lot of uncertainty. Robinhood is a different situation. SBF, Sam Bankman-Fried, he owned over 7% of Robinhood shares. 55 million shares. So there’s pressure there just because there’s uncertainty about what’s going to happen to their stocks. Basically, they are very little affected by what happens here, in our opinion. So we think the move in Robinhood is a pretty big overreaction.

– That’s interesting there. And Devin, that really explains why the ratings you have on these stocks. You have a better rating on Coinbase. $155 price target. You mentioned the impact this could potentially have just in terms of adoption. I would think that would be a big risk when we talk about the impact that could have on Coinbase. It doesn’t seem like you agree. Why?

DEVIN RYAN: Yes. So I think you need to take a step back and talk about the actual reason this industry exists and whether you believe that the blockchain technology and some of the cryptoassets that have been created actually have real utility and will continue to evolve. And that is our position here. Now we can probably all agree that there has been a lot of profit in the industry in the last couple of years.

There are almost 20,000 cryptocurrencies. I am on the record and say that I think only a couple of percent of these actually have real use and real possibilities. But that’s really what you have to have, just a couple of percent, for this to be a thriving industry. And so in our opinion, blockchain technology is disruptive and will change many aspects of how business is done in the long term.

And so Coinbase is a major on-ramp and off-ramp into that. And so in the short term, in my opinion, people are probably selling crypto assets and moving to the sidelines on the retail side. On the institutional side, Coinbase will probably actually consolidate shares very quickly here because people still need a custodian if they’re not completely out of the business. And now it’s very obvious that Coinbase is where safety and soundness is, in our opinion.

But the long-term is really about blockchain technology. And this will get people back to the serious stuff of building real use cases. And feel free to talk about some of them. But we remain very optimistic about the future of the industry.

– And Devin, we’ve heard a lot of people say, look, this is a real wake-up call to remind people why they started investing in things like decentralized finance in the first place, because you’re going to have bad actors, whether it’s in traditional finance or crypto too. But when all this shakes out, what do you think the industry will look like?

DEVIN RYAN: Yes. So that’s a great question. And again, we’re kind of in the middle of that right now. So I think things could get worse before they get better. But it is quite clear that you need more transparency. And one of the benefits of blockchain technology is the transparency it provides. But the problems that are happening right now are with some kind of traditional financial players.

These are firms – we’ve seen it in the past where companies take too much leverage or they’re not good risk managers, or maybe even in this case there’s some fraudulent activity going on. And so that means that there must be more scrutiny and potentially more regulation around the centralized players in the industry. But it also does not necessarily mean that what happens in the decentralized part of the industry is wrong.

But what I think it will do is again bring people back to the serious part of the business and take away some of this kind of speculative profit that has already, to be honest, come out of the market over the last year here. But I think this just further separates companies that are building real platforms on the blockchain with real use cases versus people going in and buying and selling without knowing much about what they’re buying and selling.

And I think we’re really moving into what is actually probably in the long run a good more fundamental market. But it’s going to get messy in the short term, we just don’t know where the contagion ends here. And sometimes that leads to more sales beyond anything you would say is basic.

– Yes. And Devin, to that end you obviously mentioned before that it could get worse before it gets better. I guess the question that everyone wants to know the answer to is how much worse. Can you give us a general idea of ​​what we could potentially see on the downside.?

DEVIN RYAN: Yes. Well, I think you can look at other times in history and other market crises, if you want. I covered the investment banks again through the financial crisis. There have been other examples of fraud. The size and scope of this is, in our opinion, much smaller than any form of financial crisis contagion. There are billions of dollars in assets and potential losses. But it is also spread among many, many people.

Where I think the contagion is that you have bankruptcies, then you have assets, and you have crypto-assets that potentially have to be sold in bankruptcy proceedings. And when you have a market where everyone knows there are many sellers, buyers usually wait. And so things can certainly get worse both from a bankruptcy perspective since there is contagion there, but also crypto assets that feel the pressure to sell without buying.

But the size and scope of this is, in our opinion, much, much smaller than other financial crises where you are talking about the entire financial system with many, many times the influence. This is billions of dollars, which is a lot of money, but it’s not as widespread as what we’ve seen in some other cases in the past.