Bitcoin may fall below $10,000 in the current crypto winter 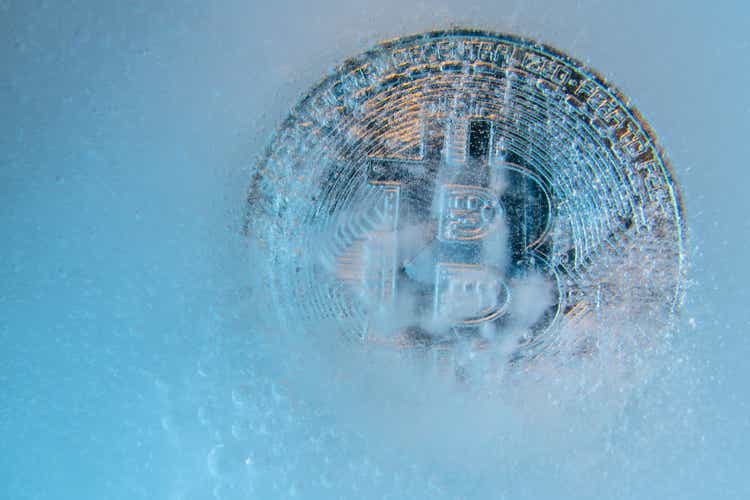 Bitcoin (BTC-USD) has been stuck in a crypto winter for some time, which the image above this article very aptly illustrates. While global markets appeared to be recovering over the past couple of weeks, it appears that there is no slowing down for cryptocurrencies with an endless stream of bad news for Bitcoin and crypto investors. Of course, most especially sudden bankruptcy by FTX (FTT-USD) that has the potential to negatively impact Bitcoin in the near future, and may even trigger a larger one crisis.

Parallels between past events and today

This is not an entirely unique situation. Bitcoin has had its problems in the past, for example in 2014. Most Bitcoin investors will probably have heard of Mt. Gox. Mt. Gox was a major currency exchange that at one point handled approximately 70% of Bitcoin transactions worldwide. This exchange already experienced some problems with hacks and leaks in the years leading up to 2014, but in February 2014 the company went bankrupt due to a software bug that led to stolen Bitcoins. A company as large as this, handling 70% of worldwide transactions in 2014, may have been an even bigger negative event for Bitcoin than the recent FTX decline.

As we can see in all the graphs, the current drawdown looks bad, but still not as bad as it was in 2013-2015. Now let’s put numbers on these corrections and see what happened in the past compared to today.

In a previous article I wrote about Bitcoin, I made a table of major Bitcoin crashes and drawdowns. Since this table gives a good overview of the price development, I paste it here again:

See also  Bulls and Bears of the Week: Tesla, Apple, Meta, Bitcoin and An Investor Darling Down 70% - Alphabet (NASDAQ:GOOG)

Table 1: major Bitcoin crashes (created by author). Note that I took the daily average prices for highs and lows.

Let’s take a look at this price trend. In 2013-2015, prices went from a high of $1242 in 2013 to a low of $170 in January 2015. This was a decline of more than 86%. The first correction in this table, which was triggered by a Mt. Gox security breach, was more serious percentage-wise, but prices were still at a very low level compared to now, so I’m ignoring this one in my analysis.

As we can clearly see from the table, it took more than a year for the more serious corrections (2013-2015 and the end of 2017) Bitcoin prices to reach their lowest level and more than 3 years to reach a new all-time high.

Currently, Bitcoin has fallen from the high of $68,789 in November 2021 to the current price of $16,750. This is a drop of 75% already. If we expect the current situation to be comparable to the situation in 2013-2015 and the fall will be similar in percentage terms, Bitcoin has room to fall to just under $10,000. Compared to the correction that started in 2017, Bitcoin would have to fall to around $12,500 to equal those losses percentage-wise.

There are many parallels between the situation of Bitcoin in 2014 and now:

There are also some signals, however, that the current situation is very different from the situation in 2013-2015.

Let’s take a look at the last point I mentioned. How do interest rates and inflation affect the price of Bitcoin and cryptocurrency in general?

Graph 2: The development of the inflation rate in some major economies (source: YCharts)

First, let’s look at inflation rates. In the graph above, the inflation rates in some of the world’s most important economies are depicted (USA, China, Germany, Japan, Great Britain). As we can see, there is a big discrepancy here: “Western” inflation (US, Germany and UK) has picked up dramatically while “Asian” (China and Japan) inflation has remained fairly stable. Why this is the case is beyond the scope of this article, but a couple of reasons probably include the war in Ukraine, the energy crisis and Zero covid policy in China. But overall, the global inflation rate has picked up since 2021, and is certainly at a higher level than it was in 2013-2015 when the last big crypto winter happened.

Theoretically, Bitcoin acts as an inflation hedge. I put the theoretical world in italics, as there is not yet sufficient data to confirm this. But let’s think about the forces at work between crypto markets and currency markets when there exists a world where fiat currency is inflated (and central banks raise interest rates):

Perhaps even more important than how far Bitcoin’s price will fall is how long the crypto winter will last. But a straight answer to this question cannot be given. If we compare today’s situation with the situation in 2013-2015, where it took one year and 7 months for Bitcoin to find a low and more than three years to reach a new high, it would not be extraordinary to expect that Bitcoin could reach a new low around mid-2023, and return to the previous high not before the end of 2024. That is, if the situations are comparable and history repeats itself. And that is, if Bitcoin ever returns to its previous all-time high, which some doubt.

Of course, history does not repeat itself, but it often rhymes, and the situation in 2013-2015 is not entirely comparable to today’s situation. Things that are quite different now are inflation, interest rates, the geopolitical situation and the fact that we are not recovering from a financial crisis right now.

As I argued in this article, inflation can have a short-term negative effect on cryptocurrency, but a long-term positive effect. Compared to previous corrections, the Bitcoin price could easily go below $10,000 and it could last until the end of 2024 before we see new all-time highs, if ever.

But I still see potential for Bitcoin and cryptocurrency in the financial system of the future, and while the crypto markets can be particularly brutal, prices have the potential to experience major recovery in the medium to long term. An interesting catalyst could be the change of Bitcoin from proof-of-work to proof-of-stake, should it ever happen. Also note that I looked almost exclusively at Bitcoin in this article, but most other cryptocurrencies are affected by the factors at work here. In fact, other cryptocurrencies, especially Ethereum (ETH-USD), are becoming more important compared to Bitcoin, as you can see on the Bitcoin dominance chart here.

Last but not least, please keep in mind that investing in cryptocurrency carries a lot of risk, so don’t use leverage and don’t invest more than you can afford to lose.

Thank you for reading! If you have views about Bitcoin or other cryptocurrencies and the latest crypto winter, please let me know in the comments below!