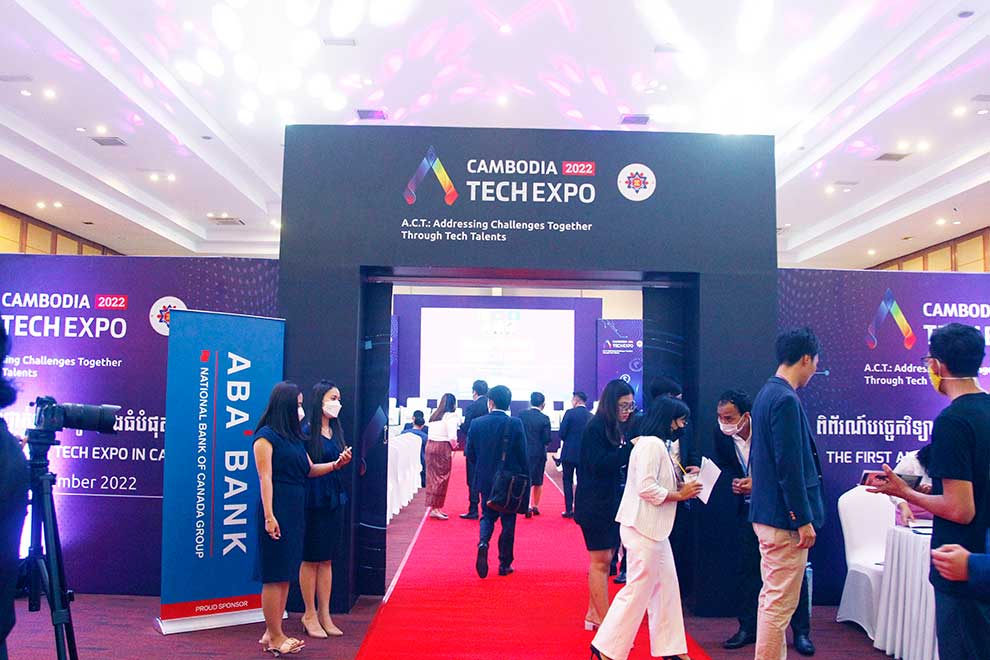 Financial technology (fintech) has revolutionized the entire industry – improving access to and use of services, in a trend particularly pronounced during the Covid-19 crisis – and has become firmly entrenched in business, investment and a range of other important economic activities in the post- pandemic world, pundits emphasized on 11 November.

They were speaking at an event on the FinTech stage of the first Cambodia Tech Expo (CTX) held in Phnom Penh on 11 November. The stage was set up as a platform to gather community input to inform policy decisions about the development of the local fintech. sector, as well as to accelerate the establishment of digital economy and fintech solutions and applications in the Kingdom.

The Ministry of Economy and Finance’s Permanent Secretary for Foreign Affairs Vongsey Vissoth said the pandemic has highlighted fintech and digital technologies as “high potential” drivers of regional and global economic growth, as demonstrated in four main patterns.

These, he said, are increases in fair competition and the efficiency of financial services; creation of new market segments and strengthening of existing ones; improvements in financial inclusion through a range of user-friendly digital platforms; and improvements and expansions in the ecosystem of micro, small and medium enterprises (MSMEs) and start-ups.

“During the Covid-19 pandemic, the use of electronic payment systems has continued to increase. To observe the potential of the fintech sector, the Royal Government of Cambodia is currently preparing the draft Cambodia Fintech Development Policy to establish a common framework for the fintech sector.

“[The policy would also] help address the various shortcomings in the accelerating fintech development, with the Digital Economy and Business Committee as the responsible institution to facilitate the draft, Vissoth said.

See also  How fintech has changed the way we pay

At the same event, Cambodia Microfinance Association chairman Sok Voeun noted that the local financial industry has been in a “critical digital transformation” over the past decade.

The National Bank of Cambodia (NBC) has implemented a number of major national interoperability platforms such as Cambodia Shared Switch (CSS) which connected all ATMs, the FAST system and Real-Time Fund Transfer (RFT), as well as KHQR system based on blockchain technology, said he.

“The Covid-19 pandemic has played a crucial role in accelerating this trend as many industries have moved to cashless transactions,” Voeun said, adding that new delivery apps as well as e-payment and other fintech solutions to improve the quality of service continues to be rolled out and adopted by Cambodians for their quality of life benefits.

Meanwhile, Association of Banks in Cambodia (ABC) chairman Raymond Sia told the event that the pace of digitization in the kingdom was at a record high.

To illustrate his point, Sia said that according to the World Bank, mobile subscriptions in the kingdom rose from 57 percent of the population in 2010 to 126 percent in 2020. “Almost every Cambodian has a mobile phone,” he claimed.

“In the financial sector, we have seen more than a 10-fold increase in digital transactions in the last two years through payment systems and payment providers,” he said, adding that ABC data shows that the value of said transactions increased almost fivefold, passing $250 million per year.

“In the financial sector, digitalisation, innovation and technology are centered around our customers. Our industry is a people-centric industry. Financial services are a primary need and we must ensure that they reach all Cambodian citizens for the success and sustainability of the sector and the economy, he added.

For reference, NBC reported that 698.8 million electronic payment transactions totaling $199.76 billion were made in the kingdom last year.