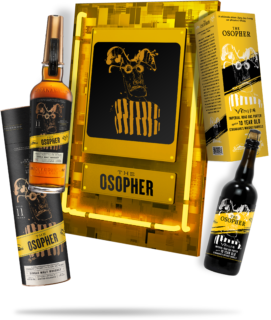 After selling out their last limited edition product collaboration within days, Stranahan’s Colorado Whiskey and Flying Dog Brewery have teamed up again to create an exclusive ultra-premium collection set, “The Osopher NFT Bundle.” This limited edition set marks the first time Stranahan’s and Flying Dog will sell their respective limited edition “The Osopher” products as a collection to a national audience. On Thursday, November 10, 2022, whiskey and beer fans alike can purchase the collection exclusively at SpiritsNetwork.com. Ten percent of the proceeds will be donated to the First Responders Foundation.

Twenty-three collection sets will be available for $230 and include the following:

In August 2022, Stranahan’s Colorado Whiskey and Flying Dog Brewery launched their first joint limited edition product release collaboration, “The Osopher Project”, to celebrate their shared history and the memory of their founder George Stranahan. The limited-edition whiskey sold out in 72 hours, with people queuing outside Stranahan’s distillery in Denver, Colorado, from midnight on launch day. The limited edition Flying Dog beer also immediately sold out at specific Maryland retailers. Both Stranahan’s and Flying Dog are excited to take their partnership to the next level on a national scale – an expansion truly dedicated to their dedicated fans.

Stranahan’s Colorado Whiskey and Flying Dog Brewery has a shared connection, history and founder; However, The Osopher Project, which launched in the summer of 2022, marked the first joint product release for the two companies. This collaboration celebrates the intersection of George Stranahan’s achievements as a distiller and brewer. The resulting beer and whiskey are a true testament to the art, science and creativity on which George built both companies. Osopher speaks to the idea that you can pursue anything if you’re just crazy enough to try.

Stranahan’s “The Osopher” is the oldest whiskey the distillery has ever bottled. It stays true to George Stranahan’s passion for creativity and Stranahan’s commitment to innovative American Single Malt Whiskey. It begins its aging journey for 11 years at the distillery before maturing for a further four months in casks used to age Flying Dog’s Road Dog Porter. The flavor profile consists of the following:

The limited edition Flying Dog beer created for The Osopher Project is an imperial version of Road Dog Porter, an early creation of the brewery. Road Dog was one of the first beers to be packaged in original artwork by internationally renowned artist Ralph Steadman; a version of this label was used to create The Osophers for both labels as well as NFT. Flying Dog’s Imperial Road Dog Porter was aged in 10-year-old Stranahan’s whiskey casks before bottling. The results are:

This project is powered by YellowHeart, the Web3 ticketing, music and membership marketplace.

Stranahan’s Colorado Whiskey is a pioneering and award-winning American single malt whiskey consisting of 100% malted barley and Rocky Mountain water, aged in new American white oak barrels. From grain to glass, Stranahan’s whiskey is distilled and bottled at their Colorado distillery, the state’s first legal distillery since Prohibition. Stranahan’s expressions include Original, Blue Peak, Sherry Cask, Diamond Peak, Mountain Angel 10-Year-Old, and the annual limited edition release: Snowflake. As one of the first and best-selling American single malts, Stranahan’s is committed to building recognition and admiration for the category globally.

See also  In our evolving digital age, the world's first private NFT 'golf and adventure resort' is coming to Sisters

As the 35th largest craft brewery in the United States, Flying Dog has a reputation for brewing premium beers that push the boundaries of traditional styles out of our home base in Frederick, MD. From hop-heavy favorites like The Truth Imperial IPA and Double Dog Double IPA to left-field bestsellers like Kujo Cold Brew Coffee Porter and Dead Rise Old Bay Summer Ale, we pride ourselves on challenging the status quo. Our brand is built on the Gonzo gospel, drawing inspiration from Hunter S. Thompson’s relentless pursuit of truth and Ralph Steadman’s provocative drawings. In true gonzo spirit, when authoritarians have tried to censor our creativity, we’ve gone to federal court to defend our right to free speech and expression and won. At Flying Dog we challenge conformity, embrace the weird and encourage you to Cut The Leash and reclaim your independence.

When George Stranahan first founded Flying Dog Brewery just outside of Aspen, Hunter S Thompson immediately suggested that Ralph Steadman produce the labels for their first beer, Road Dog. Flying Dog still uses Ralph’s work on their beer bottles today, so it was a natural fit to use the first artwork on Osopher Whisky. Steadman is best known for his collaborations with Hunter S Thompson including Fear and Loathing in Las Vegas and The Curse of Lono. He has illustrated literary classics such as Alice in Wonderland and Treasure Island, and written his own books including I Leonardo, Freud and The Big I Am. Other collaborations include Pyschogeography with Will Self and the Gonzovation Trilogy about endangered animals with Ceri Levy. Ralph has been a trailblazer, recently starting to stamp his art as NFTs at objkt.com at steadmanart.tez and is enjoying exploring the new possibilities that Web 3 offers.

See also  Out of the sandbox, Axie Infinity and Big Eyes Coin, which crypto platform had the biggest impact on the NFT sector?

About the First Responders Foundation

Founded in 2017, YellowHeart is the leading Web3 marketplace for ticketing, music and memberships, accepting both crypto and credit card payments. Powered by distributed ledger technology, YellowHeart’s platform was designed to help the larger industry upgrade to the next phase of ticketing, giving control back to artists and fans. YellowHeart is one of the earliest adopters of blockchain tickets and music, having released the first-ever NFT tickets and NFT album with Kings of Leon in 2021. Tao Group Hospitality, MGM Resorts, Maroon 5, Julian Lennon and ZHU are just a few few of the globally recognized artists and brands YellowHeart works with.