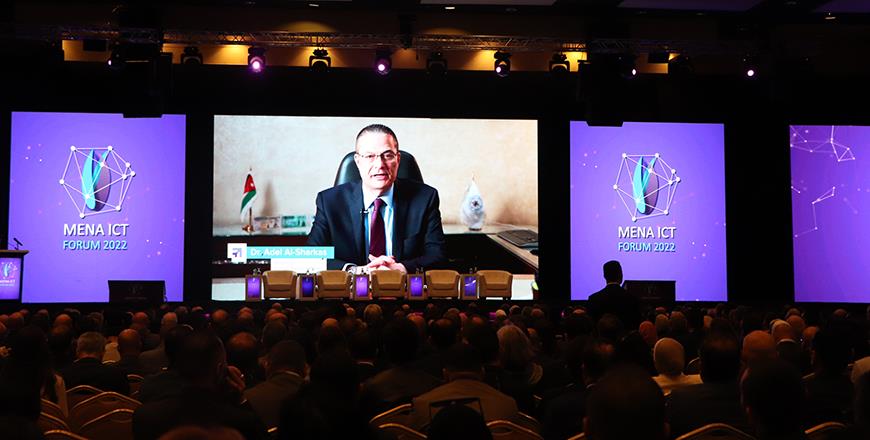 AMMAN – During the proceedings of the MENA ICT Forum, Adel Sharkas, Governor of the Central Bank of Jordan and Chairman of the Jordan Payments and Clearing Company (JoPACC), announced the launch of the Jordan Innovation Fintech Incubator “JOIN Fincubator” and Regulatory Sandbox “Jo Reg Box”.

The two-day forum, which started on Wednesday, is being held under the patronage of His Majesty King Abdullah at the King Hussein Bin Talal Convention Centre.

The inauguration of the JOIN Fincubator was driven by the Central Bank of Jordan and JoPACC’s commitment to realizing financial stability, promoting an advanced financial infrastructure and increasing digital financial inclusion, according to a statement posted on the JoPACC website.

It comes as a response to His Majesty King Abdullah’s 2022 Economic Modernization Vision, which aims to make the Kingdom’s economy an enabling, inclusive, sustainable and resilient one, and to provide empowering opportunities to both people, entrepreneurs and businesses.

JOIN Fincubator is the first fintech innovation incubator of its kind in Jordan. It provides participants in its programs with a range of services; from access to digital financial infrastructure so they can actively test, validate and develop their fintech innovations, to access to expertise, advisory services and mentorship, to access to partnerships, finance and markets.

JOIN Fincubator targets startups, financial institutions, students and investors in Jordan and the MENA region who can benefit from developing fintech products and solutions, and can help build, enrich and expand Jordan’s digital economy.

Sharkas stated that with the launch of the JOIN Fincubator, innovators will be able to pursue their fintech concepts in a single hub that offers mentorship, expert services, real-world testing and regulatory advice and certification.

The Central Bank of Jordan will have a direct presence and involvement in the JOIN Fincubator through its regulatory sandbox (Jo Reg Box), facilitating an unparalleled opportunity for immediate interaction between the innovators and the regulator.

The MENA ICT Forum is held every two years in Jordan and is organized by Intaj, the ICT Association in Jordan – of which JoPACC is a member.

This year’s forum, which celebrated its 20th anniversary and was attended by over 2,000 people from around the world, has the theme “Fusing Technologies, Digitalizing & Bridging Borders, Reshaping the Generations of the Future”.

The forum aims to address how technology can help solve pressing challenges facing most nations in today’s age, including alarming unemployment rates, healthcare and rebuilding digital economies, and fintech’s role in creating transparency and bridging communities.