Is blockchain beating the ballot box? 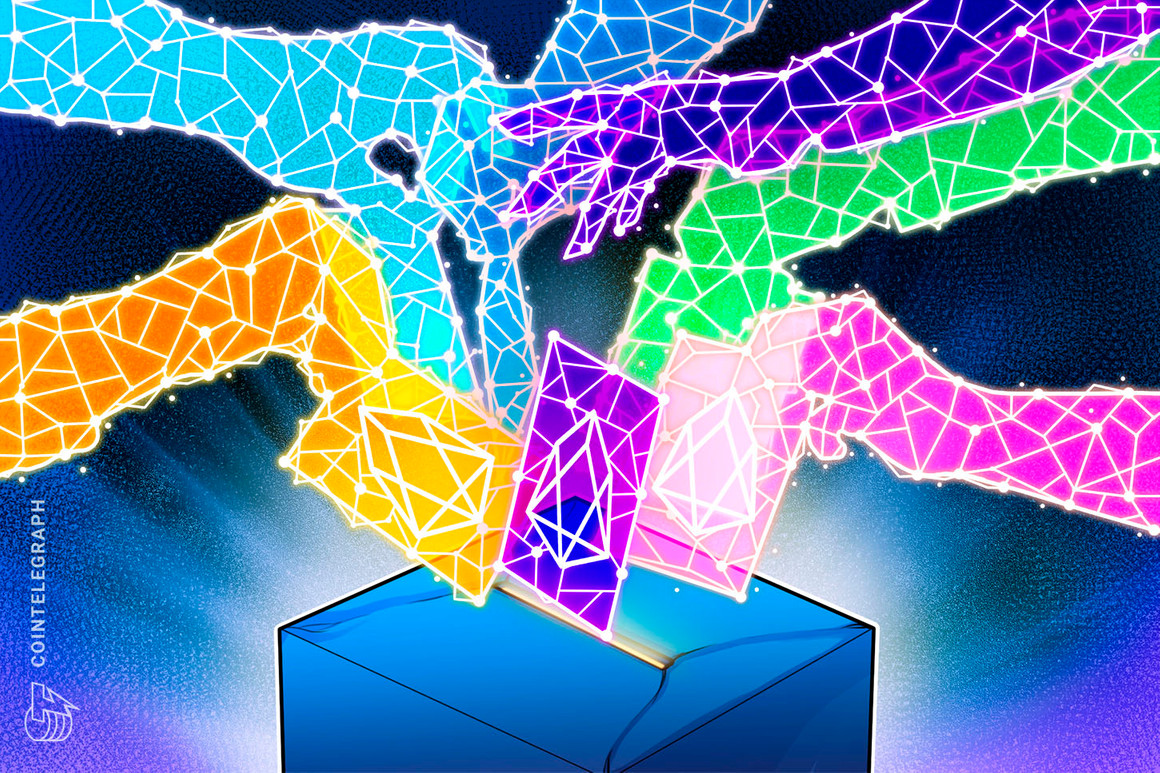 In October, it was reported that Greenland was investigating the possibility of an online voting platform for its national elections. Among the options being considered is a blockchain-based system.

It seems particularly timely now, as large parts of the world’s population are raising questions about election integrity – especially in the US, but also in other countries, such as Brazil.

Tim Goggin, CEO of Horizon State, for one, believes that blockchain-enabled elections represent a “significant improvement” over the way most elections are run today. Voting machines break down, software fails and electoral irregularities often create uncertainty and doubt among those entitled to vote.

With a public blockchain, by comparison, “it’s much easier for voters to track their vote,” Goggin told Cointelegraph, “and audit an election themselves.”

Also, if something untoward occurs in the voting process, it’s easier to identify on a decentralized ledger with thousands of nodes than on current tabulation systems “where counting is done behind closed doors,” says Goggin, whose company created a public election for South Australia in 2019, the first time blockchain technology was used in the voting process for the Australian state.

Marta Piekarska, senior DAO strategist at ConsenSys, recalls working at Hyperledger in 2016, where blockchain voting was discussed as a promising use case. “Six years later and we’re still talking about this,” she told Cointelegraph. “We’re still pretty far from a situation where any kind of distributed ledger would be considered” — at least in a national election.

A few countries, notably Estonia, have experimented with systems that allow people to vote online, she further explained. On the other hand, the Netherlands “abandoned the idea of ​​doing electronic voting because of some of the concerns about the security and authenticity of the votes.”

Then there is sparsely populated Greenland, where the great distances make it difficult for people to vote in person. A group of researchers from Concordium Blockchain, Aarhus University, Alexandra Institute and the IT University will soon investigate “whether a blockchain-based system will be a more reliable e-choice on the world’s largest island”, according to Concordium’s press release.

Any voting system requires trust, and trust requires a number of properties – all of which can be a challenge depending on the circumstances, says Kåre Kjelstrøm, chief technology officer at Concordium, to Cointelegraph. For in-person voting, these include: whitelisting: ensuring that only eligible voters participate; identification: voters must prove their identity when casting a vote; anonymity: votes are cast privately and cannot be traced back to the voter; security: sites are secured by the authorities; and immutability: votes cast cannot be changed.

– Any digital system that replaces a manual voting system must at least address the same issues to ensure trust, and this has proven to be quite difficult to achieve, explained Kjelstrøm. “But blockchain could prove to be part of a solution.”

A public decentralized blockchain ensures immutability by default, after all, “in that any transaction written can never be erased.” The system is secured with cryptography and “transactions are anonymous, but are open to inspection by anyone in the world,” Kjelstrøm said, adding:

“The trick is to maintain privacy and anonymity while ensuring that every eligible voter can only cast their vote once. […] This is a current research topic at top institutions.”

“The biggest problems I see for public elections as opposed to say corporate governance is that there can’t be an unlicensed [blockchain] system because voter information is private and we cannot trust all third parties,” Amrita Dhillon, Professor of Economics at the Department of Political Economy at King’s College London, told Cointelegraph.

“The other problem is to submit the vote in a place of the voters’ choice: we cannot prevent someone from coercing voters at the time they submit the e-vote,” she added.

Recent: Is DOGE Really Worth the Hype Even After Musk’s Twitter Purchase?

Others say that permissioned chains are not the answer because they are run by a single entity or group of entities that exercise full control over the system. “In the worst case, this means that a private blockchain can be tampered with by the same guardians and rigged elections,” said Kjelstrøm. This is not a big problem in Western countries, “but in large parts of the world this is not true.”

On the other hand, if one can “weave self-sovereign identity (SSI) into the core protocol,” as Concordium, a layer-1 public blockchain, wants to do, it “could be just the right technology to power public elections, ” said Kjelstrøm.

That said, Goggin noted that many governments will likely choose to use private blockchains in line with their own privacy/data laws, and there are many ways to set up permissioned blockchains. But if they do not at least offer the public a verifiable trail of voter registrations, they are unlikely to increase public faith in election integrity. He calls himself “a big fan” of public and distributed blockchains.

The privacy issue is particularly knotty when it comes to public elections. “You shouldn’t be able to tell which candidate a person voted for, or even if they voted at all,” Vitalik Buterin wrote in a blog titled “Blockchain voting is overrated among uninformed people, but underrated among informed people.” On the other hand, you want to ensure – and if necessary prove – that only eligible voters have voted, so some information such as addresses and citizenship status may need to be collected. Buterin saw encryption as a way around the privacy problem.

Goggin suggests something similar. Horizon State may ask a client to “hash,” i.e., encrypt or scramble, voting identities “before we get them, and we hash those identities again.” This means that neither the client nor Horizon State can easily determine who voted or how they voted. He added:

“Voters will be able to see their vote on the chain, but there is no way for voters to prove that it is their vote, given that they can also see other votes on the blockchain.”

Dhillon, for his part, proposes a compromise where “some parts of the process are centralized”, i.e. voters come to a booth where their identity is checked and they submit their vote, “but subsequent parts of the chain can be decentralized to make them more secure and tamper-proof .”

In 2014, the city’s Active Citizen e-voting platform was created to allow Muscovites to have a say in non-political municipal decisions, and in 2017 it used the Ethereum blockchain for a series of opinion polls. The largest of these took 220,000 inhabitants and the voting results were publicly auditable. It revealed some scaling limitations.

“The platform based on proof-of-work peaked at approximately 1,000 transactions per minute [16.7 transactions per second]. This meant it would not be easy for the platform to handle the volume if a higher proportion of Moscow’s 12 million residents participated in the vote, said Nir Kshetri, a professor at the University of North’s Bryan School of Business and Economics. Carolina at Greensboro. From this, Kshetri and others concluded that this PoW version of the Ethereum blockchain “was not sufficient to handle national elections.”

However, things may be different in 2023, when Ethereum 2.0 implements sharding. This could increase the chain’s speed to as high as 100,000 TPS, which in turn “increases the Ethereum blockchain’s attractiveness for voting,” he told Cointelegraph.

But blockchains likely still need to be more secure before they are ready for public choice, although this is manageable in Kshetri’s view. “Blockchains are likely to become more secure with increasing maturity.”

Buterin also said in 2021 that security was still an issue in relation to elections. For that reason, “in the short term, any form of blockchain voting should certainly remain limited to small-scale experiments. […] Security at the moment is definitely not good enough to rely on computers for everything.”

Online transactions, unlike manual systems, “can happen in an instant,” Kjelstrøm added, and software-driven attacks on an e-voting system could “potentially impede or damage the system or the vote.” Therefore, “any new system must be introduced slowly to ensure that the voting system remains intact and fully functional.” Governments can start small and conduct proof-of-concepts for selected non-critical options first, he said.

See also  How Ethereum Could Solve the "Blockchain Trilemma"

Ease of use is critical

Technology is not the only obstacle that needs to be overcome before blockchain voting achieves widespread adoption. There are also political and social challenges.

“The technology is there,” Piekarska said. “We can do it right now. I mean, decentralized autonomous organizations are governed through online voting now, and they manage trillions of dollars.” But national elections are a different beast, she suggested, because:

“At the government level, your problem is: how do you create a system that can be used by citizens?”

One’s constituency is not tech-savvy members of a DAO, “but people like my mother, who are still struggling with online banking,” Piekarska added.

How long will it be before the first national election with blockchain voting? – Hopefully not ten years, but we are certainly not there yet, said Kjelstrøm.

“It could be tomorrow, or it could be 50 or 60 years from now,” Piekarska said, “because there are so many things that need to be adjusted.” In Europe, most people trust their government, and the quality of voting is not really an issue, so there may not be much urgency to push for encrypted auditable accounts. In nations with weaker governance where elections are often manipulated, conversely, why would the powers that be ever consent to manipulation-free blockchain voting?

Greenland, which struggles with participation in its parliamentary elections primarily because of the great distances that its citizens have to travel to vote, may be an exception.

“Yes, some solid governments want to do the right thing, but they struggle with the availability of in-person voting,” Piekarska acknowledged. “That’s probably where we might see the first moves because there’s a very high incentive for them to do that. But these are unique situations.”

All in all, it’s crucial that people trust their voting system, whether it’s manual, electronic or blockchain-based, and it can take time to build trust. But as more people get used to accessing public services online, electronic voting should take hold in different parts of the world, and once that happens, blockchain voting could catch on, given its well-documented benefits, so that individuals can audit their own. votes.

Large-scale blockchain-enabled national elections are probably still a few years away. Still, Goggin has recently engaged in discussions “about providing choice on that scale,” adding:

“While not yet the norm, governments are beginning to consider the value that online blockchain voting systems can offer in efficiency, accessibility, speed, security and transparency.”