Grayscale Bitcoin Trust and the Attack from the Fed (OTC:GBTC) 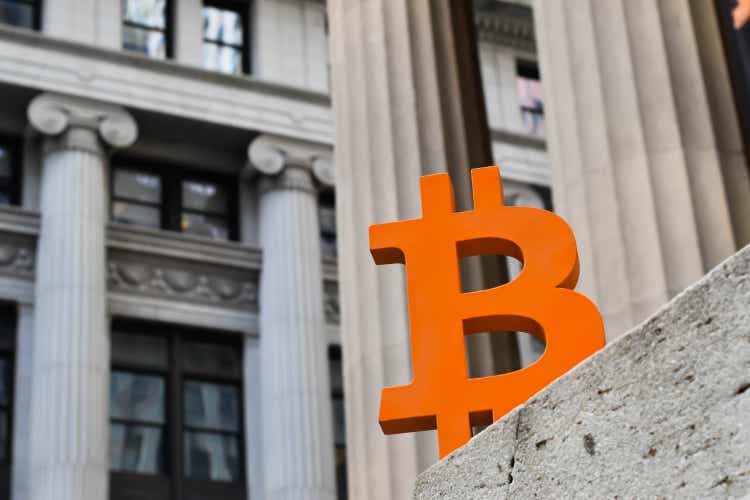 The main reasons for the decline in the price of Bitcoin are the Federal Reserve raising interest rates to combat high inflation, the flagship crypto moving in line with high-risk assets, and the strength of the US dollar.

In this article, we’ll look at why I think Bitcoin and GBTC have more limited downside than some bears think, and what factors to look for to get a clearer understanding of what the near term probabilities are for GBTC.

While I already mentioned the share price movement of GBTC in my opening comments, another factor to consider with GBTC’s performance has been that it has recently traded at a 33 percent to 35 percent discount to net asset value. (“NAV”); it is important to take into account because for some time it had been trading at a high premium to spot prices of Bitcoin. That started to change when the first Bitcoin ETF launched in Canada in February 2021.

Those who take a position in GBTC do not have direct ownership in Bitcoin. GBTC buys and holds Bitcoin, essentially acting as a Bitcoin tracking mechanism for investors.

GBTC has over 640,000 Bitcoin, which accounts for 3.12 percent of all Bitcoin in the world at this time. It has an annual management fee of 2 percent.

Consider that institutional investors view Bitcoin and GBTC the same way they view high-growth technology stocks, i.e. they size positions based on how rising interest rates will affect future cash flows and profits.

Attack by the Fed

Federal Reserve Chairman Jerome Powell has made it clear that his goal is to crush inflation. To do that, he needs to keep raising interest rates until inflation slows down sustainably.

Powell has communicated that he has a goal of raising interest rates to 4.6 percent. If he can get away with it relative to inflation, I have no doubt he will stop there. Still, there’s no certainty that will be enough to dampen inflationary momentum, so it wouldn’t surprise me to see interest rates rise to 5 percent, or possibly a bit higher.

If it plays out that way, it will definitely trigger another selloff, pushing down high-risk assets, including GBTC.

On the other hand, those calling for the Fed to be far more aggressive in its interest rate strategy have invoked Paul Volcker, who as head of the Fed from 1979 to 1987 raised interest rates to a maximum of 20 percent. The problem where the current conditions are far different from then, especially when it comes to how much debt the US government currently has.

If the Fed were to raise interest rates much above 5 percent, it would put severe pressure on the US government because the amount to pay off higher interest rates would be prohibitive; it could possibly bankrupt the country. We know Powell is not going to take that kind of action.

This is important to take into account because it limits the ceiling on interest rates, while at the same time lowering the floor for market reactions to high-risk investments. It provides visible parameters for investors when looking at entry points for GBTC.

How to determine the parameters

The most important factor to consider when looking at how the market is going to respond to the Fed is the aforementioned rate hike announced by Jerome Powell. The target of raising the interest rate to 4.6 percent should be the benchmark to work from, with the additional idea it could go as high as 5 percent, or slightly above that.

With that in mind, the next three CPI readings will determine what actions, and to what extent, Powell and the Federal Reserve will take. If the next report shows that inflation is easing, I think we will increase by 50 basis points, as the market is already pricing in. If inflation falls in any significant way, it will trigger a temporary rise in stocks, with the result being an increase in the market floor.

In my opinion, that won’t be enough to get investors too excited as they will definitely be waiting for the subsequent CPI numbers to confirm that things are starting to turn around. When that happens, we will start to see more money flowing into high-growth assets. It won’t be a flood, but it will signal a change in sentiment to a more bullishness.

Finally, near the end of 2022 and the beginning of 2023, if inflation turns out to be slowing for three consecutive months, it is likely that Powell will stop raising interest rates and the money will start flowing again to high-growth companies and foundations like GBTC.

By that time, the US dollar will have weakened as well, providing favorable conditions for investors looking to confirm that the bottom has indeed arrived.

As the Federal Reserve goes (under current economic conditions), so goes Bitcoin, and as Bitcoin goes, so goes GBTC. That correlation will remain in place at least until confirmation comes that inflation is sustainably falling. Again, I think it’s going to happen in the latter part of 2022 or early 2023.

The market will look to inflation, interest rates and the strength of the US dollar to determine when you should feel more comfortable taking on more risk. Another thing to consider is that investors don’t want to miss the coming upswing when it comes; the combination of FOMO and caution is pulling against each other now. When there is more clarity, investors will psychologically move towards FOMO, which will lead to more investments in high-growth companies and/or foundations like GBTC, resulting in the share price returning to growth mode.

A key to visibility, for me, is understanding that the Fed is limited in how high it can raise interest rates because of the record high government debt. For that reason, GBTC offers a good entry point as it stands today, and even if there is a recent drop in price, patient investors will reap solid returns in the months and years ahead.

And for those who like GBTC but are still concerned, simply use a dollar cost averaging strategy to take advantage of this compelling opportunity to take a position in GBTC at a price we likely won’t see for years, if ever again.