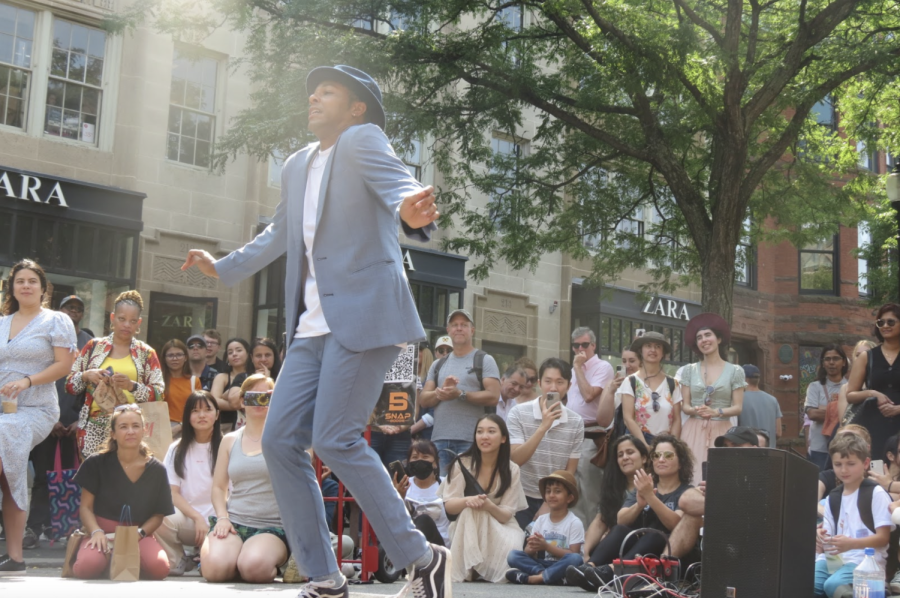 Snap Boogie has a dream: “To do a show where people pay $100 to come and see [him] do [his] thing on the big stage.” Years and years of performing, that dream hasn’t faded.

Snap Boogie, born Cjaiilon Andrade, is a Boston street performer who specializes in taps, acrobatics, and most of all, his titular move: boogieing. Most weekends he performs at Faneuil Hall, Newbury Street, a halftime show or a private event. However, weekdays are devoted to his latest professional endeavor: starting an NFT business.

“Being a street performer is completely different than being a business owner or CEO or something like that,” Andrade said. “You have to use your smarts just to get to the places you want to go.”

This former “America’s Got Talent” semifinalist has it all: charm, sense of humor, talent and entrepreneurial spirit.

In Andrade’s typical show, he dances as an eager crowd begins to gather and pulls a boy volunteer from the crowd to get them to mimic his moves.

He is calm, in his element, inspiring young people and beckoning passers-by. At his September 18 show on Newbury Street, he turned around and gestured for the kid to imitate him. Of course, the child didn’t, so Snap Boogie lifted the young girl and turned her around with ease. Her parents watched anxiously from the sidelines, some laughing, others grinning tensely from behind their phones.

After a series of tricks, now comes the real part: the dance. He boogied, improvised and popped to “Don’t Stop ’til You Get Enough” by Michael Jackson. At one point he worked his way down to the ground and stopped the music.

“The real trick is getting up,” he said.

Of course, this is just a set-up for the punchline when the 29-year-old slowly gets up as if suffering from chronic back pain.

Finally, he turned the volunteers to the climax of the song “Mr. Clean” by rapper Yung Gravy. Towards the end, he asked for donations, but that’s not his only motivation.

“I think live street theater should be for everyone, whether you have money or not,” Andrade said.

Despite using the same jokes, music and tricks for each show, much of what he does involves improvisation and crowd response.

One of his audience members, Emmanuel College sophomore Emma Connolly, said she had seen him perform in Provincetown, Mass., before but still wanted to see his show when she saw him in Boston.

“I think one of the things that I just thought about while I was watching is how it still feels like the first time I saw it, it’s super cool to see,” Connolly said. “Even if he does the same thing, it still entices us to watch the whole show.”

At the show, an older woman came up to him and started dancing next to him.

“Mom, I told you to stay in the car, I have to do my show,” Andrade said jokingly, giving her a hug. “Everybody give it up for my mom!”

He let the woman bow when she finished the dance. After the show he said he had never seen that woman before in his life.

“That’s kind of why I’m out here,” Andrade said. “I’m out here because I love people.”

People love him too. Kenia Gomez, who was visiting Boston from Cuba, said she has seen many street acts around the world but still loved the show and Andrade herself.

“I thought his personality was so lively, that’s what impressed me the most. He engaged everyone, even the kids,” Gomez said.

See also  How to stay off DOJ's, SEC's Radar when dealing with NFTs

“We all called it ‘Mount Pregnant.’ There [are] reasons for that, he said.

He never graduated and dropped out instead to pursue dance. A self-taught dancer, he said he draws inspiration from Michael Jackson, which is evident through his choppy moves and affinity for Jackson songs while performing.

“I had a lot of energy, I got ADD and anytime the music was on, I was ready to go,” Andrade said.

Andrade inherited the name “Snap” from his uncle, who was also a street performer. “Boogie” came from his chosen dance style. Andrade said many dancers call themselves “noe Boogie” as a way to identify their art.

He was 18 years old when he was on “America’s Got Talent”. In his audition video, he talked about how dancing kept him off the streets and helped him pay his mother’s bills.

His audition in New York started by moonwalking, then flashing his signature smile and doing a slow-motion animated wave to the audience that he still does at his shows today. The judges loved him immediately: on the show they described him as a “free spirit”, a “beast” with “electric” movements.

His reign on the show eventually came to an end in the semi-finals, but that didn’t stop him from gaining much recognition.

Andrade has now turned his attention to the digital space, and launched the company Beauty in the Streets in 2021 and is working on creating his own dance NFT company. The idea is to ensure that dancers and their dance moves are not plagiarized by large gaming companies. Over the past few years, NFTs, or non-fungible tokens, have increased in popularity and value as the cryptocurrency world has expanded.

NFTs can be essentially anything: an animation, a video, or a work of art. By buying an NFT, you essentially buy ownership of the product. In Boogie’s case, he creates an animation file of a person’s dance moves that can be used in video games or the metaverse.

He does this so that other dancers can take ownership of their moves and become part of the crypto community.

“The reason I say mine is a real project is because there is something behind it,” Andrade said. “This thing could last forever because what we’re doing is we’re bringing dancers closer to getting intellectual property. If you buy NFT, it allows you to buy the dance move inside the game.”

Some dancers in his company include Williams Brothers, a viral TikTok and Instagram account that posts videos of four brothers doing trend dances; Poppy Johna YouTube sensation for his breaking moves; Shafara dancer popular on Instagram and TikTok, and more.

Balancing the NFT company and finding time to perform on the street and for private companies takes work, but as demonstrated by his act, balancing is one of his strengths.

“We’re creating an ecosystem to build something for the future,” Andrade said. “Many companies have tried to steal my idea, but we have the community.”